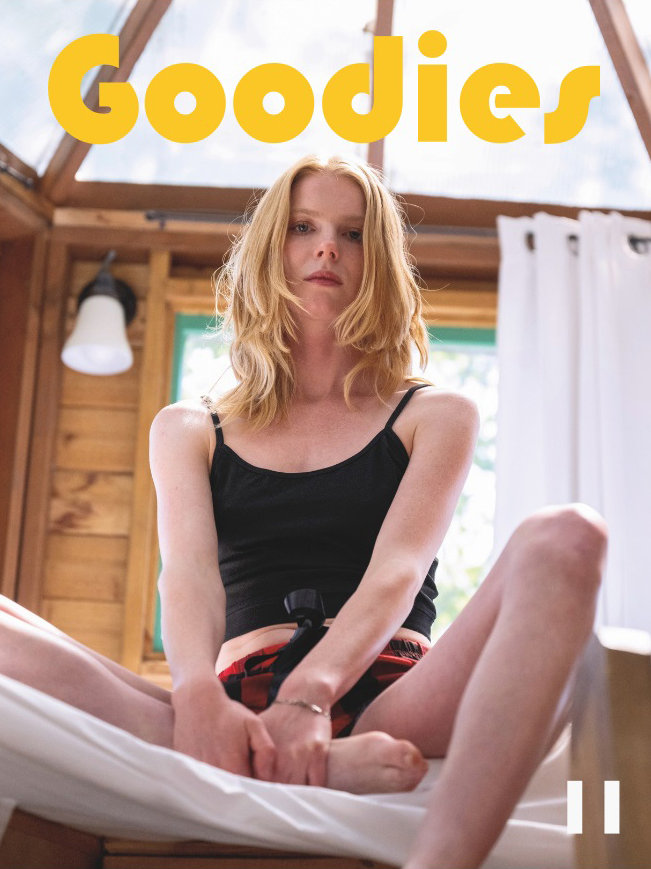 A few days ago, Goodies Issue 11 was published. I’ve been a fan of this magazine for a while. I first became aware of Goodies when they started shooting a few models that I’ve worked with. As stuff about Goodies started showing up in my feed, I couldn’t help but notice that their photography was stunning. I bought a couple of issues and was further impressed by the quality of the printed magazine. I mean, it’s just beautiful; it’s thick, high quality, beautifully designed, and filled with gorgeous nude photography and interesting articles.

What it doesn’t have, though, is ads.

I try to promote models I’ve worked with when I have an opportunity. So, when I noticed Goodies had shot Becca and Soukey, I started promoting the magazine on my social media accounts. At some point, I guess the Goodies people noticed, and that led to some conversations with Alen, their ridiculously talented head photographer. Over time, those conversations led to discussions with the rest of the Goodies team, and those conversations eventually resulted in me getting an incredible opportunity: to shoot a pictorial for Issue 11.

They gave me a lot of freedom when it came to choosing a model, location, and theme, though I obviously had to work within certain parameters to keep with the magazine’s look and feel. There were a whole bunch of models who came to mind for the shoot, but I had to rule many out for various reasons. Working with the editor and creative director, I eventually whittled the list down to just two names: Lia and Zöe.

Since I had last worked with her, Lia had moved down to Los Angeles, so that actually left me, in reality, with a list of just one. I had been wanting to work with Zöe again ever since I first shot with her about a year earlier, so I was super excited with how it worked out. After some more discussions with the editorial team, I set up a shoot with Zoe.

We shot on April 25, 2022 in a treehouse, of all places. The shoot went great… and then I spent the next five months anxiously awaiting publication of the issue*. And now it’s… finally… out!

Goodies is based out of Orange County (just South of LA), and in a happy set of circumstances, I introduced Lia to Alen, and that led to both Lia and Zöe being featured in Issue 11.

I’m still a little bit in shock that such an amazing magazine chose to publish my work. Check the issue out. I think you’ll be as impressed with Goodies as I am.

Note: There are actually two Zöes in Issue 11. I shot the one with no last name listed.

* As I’m writing this, I still haven’t actually seen the issue. My copy should be here any day. 🤞 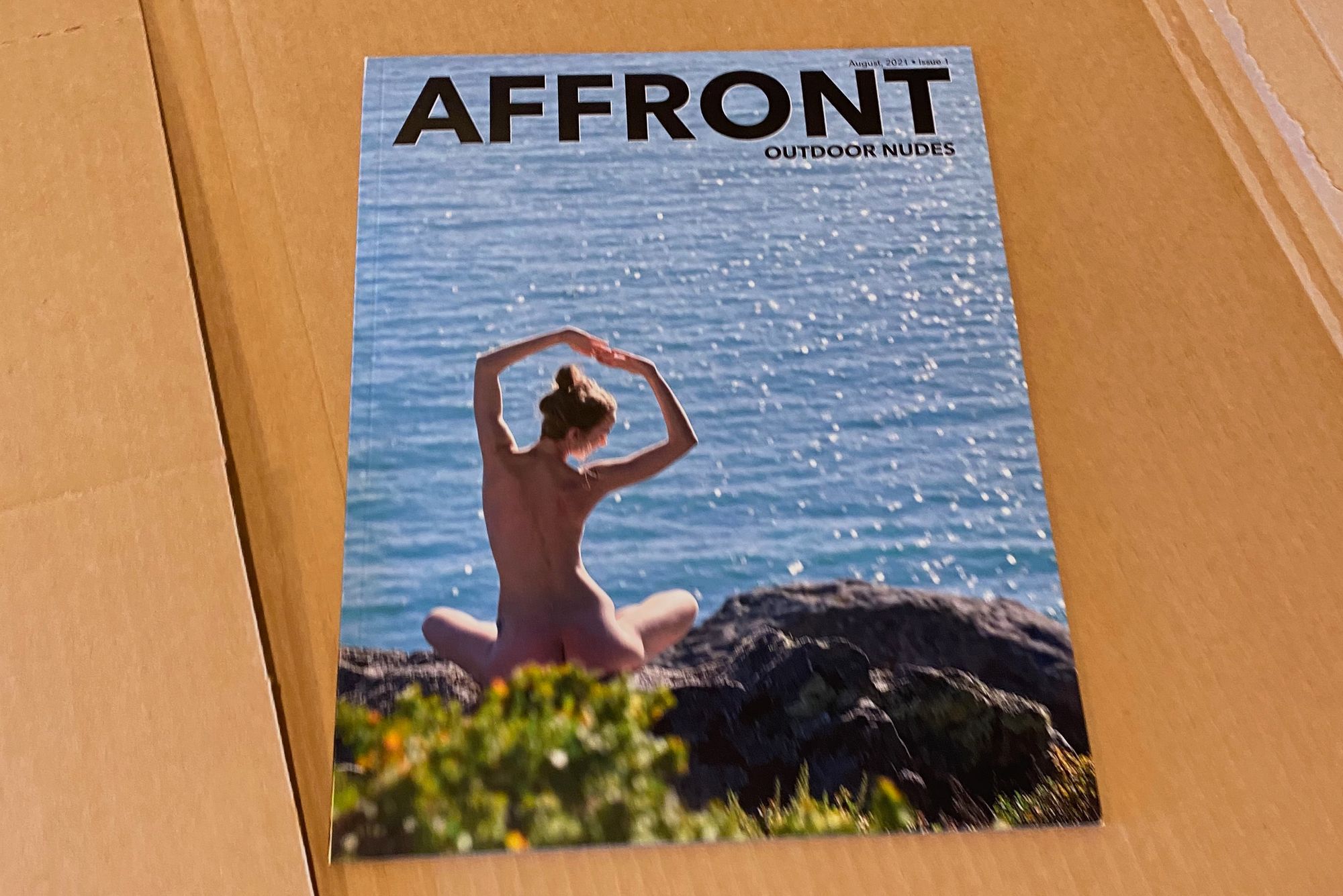 A few decades back, I worked in magazine production. That was back when digital tools were just starting to displace traditional paste-up techniques. Even though digital tools were shaking up the publishing industry, much of the process back then was still using old technology. You’d run film, and then make plates from the film, and then go do a press check before they started printing to make sure everything looked right. Even if you calibrated your monitors, it often took a few tries to get everything looking right.

Digital presses were just starting to become a thing when I was in that field, but back then, they were basically glorified laser printers. There were better technologies being developed, but they weren’t widely available yet and the on-demand technology tht was widely available just couldn’t match the quality or finish of traditional printing. Unfortunately, traditional printing methods have a significant up-front cost, which meant it usually wasn’t practical for small print runs, let alone individual one-offs.

Given that my knowledge of the field was was more than two decades out of date, I assumed that on-demand printing had become cheaper and higher quality, but I just didn’t know.

I have a few projects rattling around the old brain that are only practical if on-demand printing has achieved the same level of quality as traditional offset printing, so I threw together a 48-page “magazine” using a bunch of my outdoor nude images and printed it using Blurb to see where things are.

The first impression from the packaging was very positive. The custom cardboard sleeve kept the magazine in great shape. The turnaround was also quick: This arrived exactly one week after I ordered it, and less than two weeks from when I decided to create it.

I have no plans to sell this, but if I were going to, I’d only have to make a few minor tweaks to a handful of images. Probably not more than five of them need adjustments, and those only need very minor tweaks… which is kind of crazy to me, since I’m comparing it to press-checks I would go to back in the 90s. Despite always sending out to service bureaus for proofs multiple times, we almost always had to re-do at least a few of the plates.

To have the images be so close to what was on my screen with so little work is just mind blowing to me.

It’s amazing to me that one person spending a few hours on a couple of evenings can produce something of this quality. My cost to produce this, including shipping, was about ten bucks. The quality of the paper and the printing are excellent. The only issues are things I could easily fix by tweaking my images or my Affinity Publisher file.

Here’s a short video where I flip through the pages. 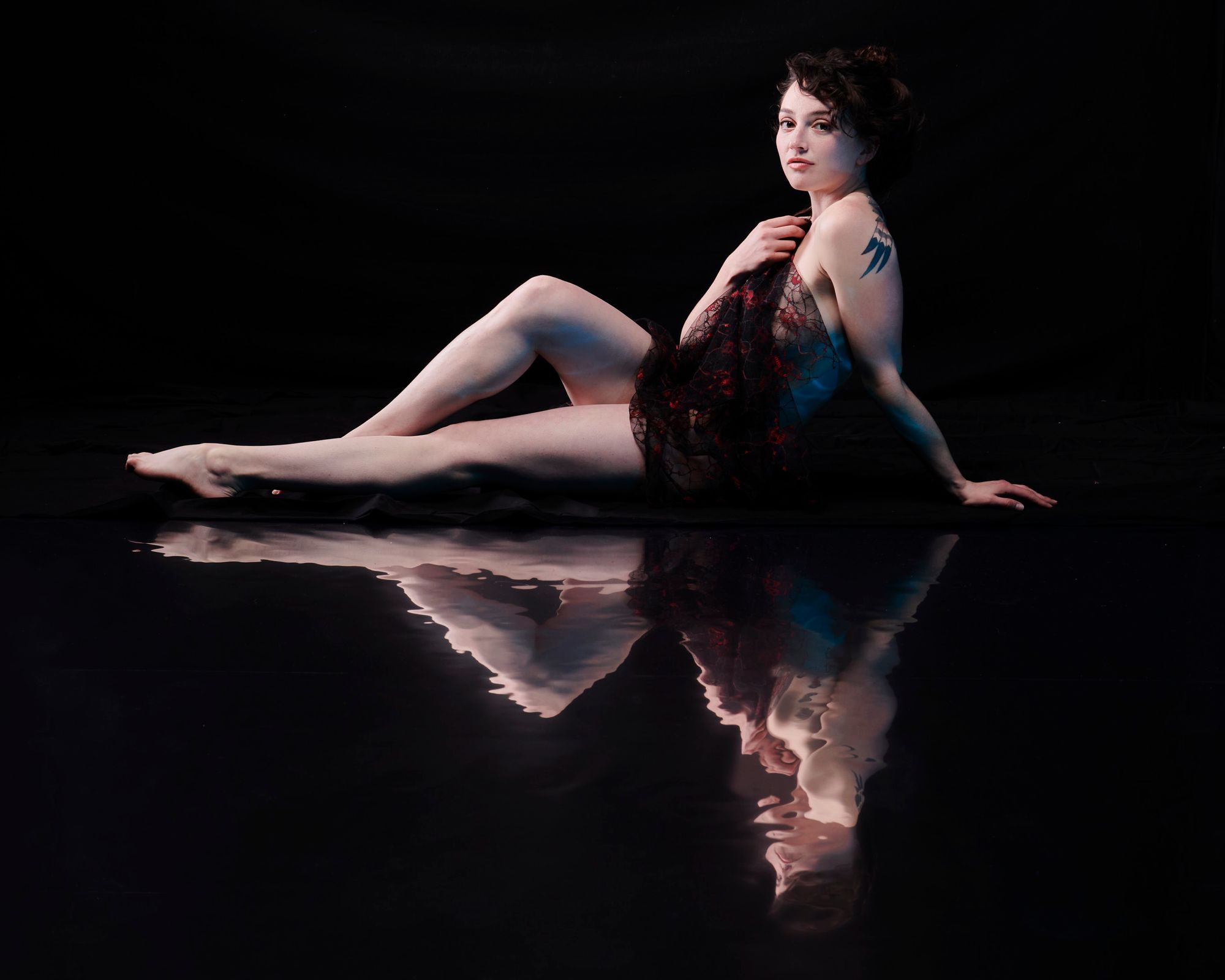 I posted this picture of Rose to social media recently and got a few questions about how it was accomplished. This seemed like a better venue to discuss it than trying to cover it using a bunch of tweets or Instagram posts.

The reflection in the shot is provided by highly reflective mylar foil designed for  grow-houses and hydroponics. I taped it down on the floor in front of the model. There are many options for doing reflections, including plexiglass, water, and actual mirrors, but I didn’t want a perfect reflection. The flexible mylar provided exactly the amount of softness and subtle distortion I was looking for without the potential mess or problems of using water in the studio.

This is what the studio looked like when we were shooting:

The overhead softbox is the key light in this setup. I metered it for ISO 200 at ƒ8 then underexposed slightly by shooting at ƒ9. The strip lights shine on the model from behind and provide separation from the background and were also metered at ƒ8.  There’s a fourth light in this setup that isn’t visible in the shot above.

The fourth was a gelled strobe with a 5″ zoom reflector that I pointed down at the foil, angled so it threw blue water-like caustic reflections onto the model. You can see those reflections on the model’s torso, left arm, and right leg.

Most of this shot was achieved in-camera, but I did do a little bit of post work to get to the final image. The strip lights and their reflections were in-frame, so I Photoshopped those out to give myself some breathing room around the model. I didn’t want to crop in too tightly, but also didn’t want the strip lights in the shot.

There was also a slightly noticeable seam where the two pieces of foil came together, which I removed in Photoshop, and I cropped it in just a little bit to bring it to a 4:5 aspect ratio. Here’s what the image looked like coming out of the camera.